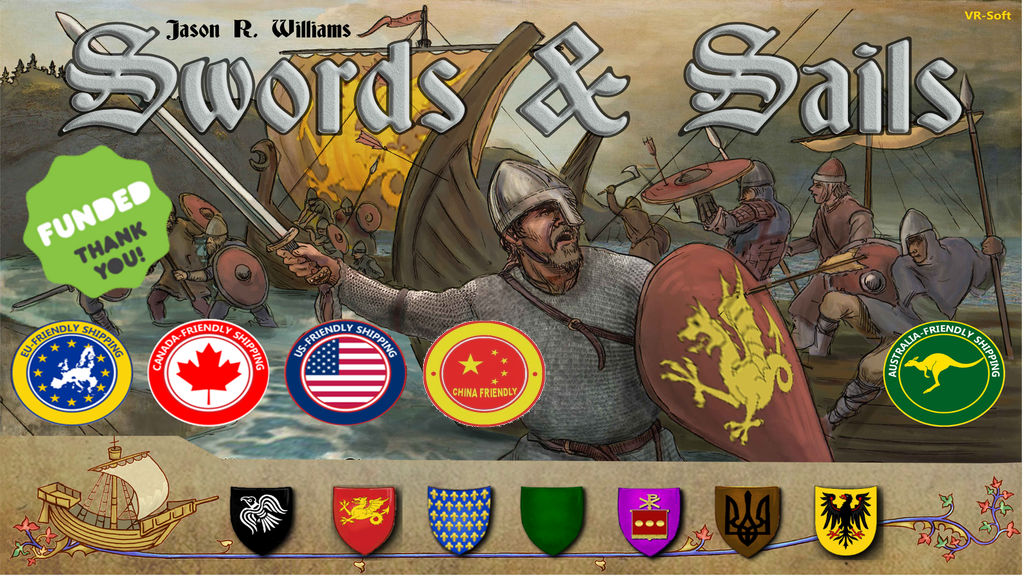 What are all these different award levels, why do you have so many?

We have several variations based off the main game. The difference are based mostly on getting the historic metal 3D coins or the Extra large Play Mat. This chart may help you decide:

PnP Rulebook in different languages will be available to international Trade Caravans.

(Note Trader’s Caravan level can purchase additional add ons as well but as these are not in a single package, they can be sold together at a small discount)

This is the main game, all the components listed in what you get in the box, is included.

Pretty simply Swords & Sails is an area conquest game which depicts all of Medieval Europe on two 6 fold maps. The full map is therefore split right through Poland and Hungary. The Baron’s pledge will give you just the West Europe Map which will include 4 Player factions (Kingdom of England with red components, Kingdom of France with blue components, the North Sea Empire with black components, and the Holy Roman Empire with yellow components). This version of the game is still fully playable for 2-4 players, it just costs less and you get less. The Caliphate of Qurtuba, a player controlled minor power will be usable on the west map.

This pledge level includes the main game (Warrior level) plus the metal historically based 3D coins. Any Stretch Goals specific to the metal coins and a Print-N-Play version of 3 Minor factions (Caliphate of Qurtuba, Kingdom of Hungary, and Kingdom of Poland) which are also a stretch goals (in which the pieces will be produced and included), bringing the number of players to 10. (Note This level does not include the X-Large Rolled up Play Mat)

This pledge level includes the main game (Warrior level) plus an extra large rolled up play mat (of the Map). Any Stretch Goals specific to the Large Play Mat and a Print-N-Play version of 3 Minor factions (Caliphate of Qurtuba, Kingdom of Hungary, and Kingdom of Poland) which are also a stretch goals (in which the pieces will be produced and included), bringing the number of players to 10. (Same as Knight but with the Play Mat instead of Coins).

This pledge level includes the main game (Warrior level) plus an extra large rolled up play mat (of the Map) and the historically based metal 3D coins. Any Stretch Goals specific to either the Large Play Mat or the metal historic coins and the Print-N-Play version of 3 Minor factions (Caliphate of Qurtuba, Kingdom of Hungary, and Kingdom of Poland) which are also a stretch goals (in which the pieces will be produced and included), bringing the number of players to 10. (This level will include everything).

Print-n-Play Only. The full color Print-n-Play (PnP) copy of Swords & Sails including printable components for all 800 full color pieces and the two large full color deluxe maps (multiple printable formats). Including Both English, German, and Spanish PnP rule books (when available French). The 3 minor factions will be available for an additional fee at the pledge manager step. (Note all pledge levels which spend $9 or more will be able to download the Print-n-Play copy. Diplomat level will not be able to download the full PnP game.

Anyone can pledge for a $1 or more to stay up to date with the project or just help out with a small donation. Pledging at least $1 will allow you access to the pledge manager and add stuff later, including all original backing levels if there is sufficient quantities but price points maybe slightly higher.

2 Player Pak Coins or other add ons reward is for people who would like these add ons but is not interested in the game reward levels. Pledge any amount in combinations of the 2 (40 coins) , 4 (80 coins), 0r 7 Player (140 coins) Paks of Historical Metal coins and / or for the cost of the Extra Large Player Mat. You must add up the cost of the rewards listed above that you would like and this amount will carry over to the pledge manager before shipping. Notice shipping costs will be added on in the Pledge Manager step. You can use the same technique to get additional add ons with your game level pledge. Just add the cost of the additional items to your game pledge level.

This reward level is only for retailers, FLGS or online stores. The minimum pledge allows ordering for 1 or more cases (4 Warrior level games including all warrior level stretch goals). Retailer Status will be verified. Addition games beyond 1 case can be added later. Final quantity defined at pledge manager step or contact us to define exact quantities. Ordering 2 or more cases for free US shipping or discounted international shipping. Add ons can be added to final order as well. Retailers can alternatively reach out to us for different terms, it is suggested that retailers which maybe interested but are not wishing to have capital hostage for so long, pledge at least at the Diplomat level and contact us privately to arrange alternative terms, as we need the quantity to manufacture as close to what demand will be as soon as possible.

What is the Game Mat made of?

Initial version is printed on a premium heavy weight 13 oz. matte vinyl banner material. This vinyl material has a woven scrim texture for durability and also assists in preventing slippage.

A stretch goal will take this up to a neoprene material.

What are the coins made of and how big are they?

The coins are made of zinc Alloy with other metals used for color. They are the same coins produced for the successful kickstarter: Swords & Sails Coins: Realistic Byzantine Coins from 1000 AD.

They come in 4 types

These sizes very to similar thickness of a quarter, Nickel, Penny and a dime US coins.

The Swords&Sails denominations are 250 for Gold, 50 for Silver, 10 for Copper, and 1 for the Bronze (these values are for game purposes)

Historically the Gold Solidius is worth 180 of the Bronze Follis coins (or 40 nummi M) or 12 Silver miliaresion or 1440 of the small light bronze 5 nummi (E) These values had changed throughout the 1000 year history of Byzantium.

Historically there are many more denominations and coin types which were minted by all the various Byzantine Emperors. Essentially each Emperor remade the coins with there own images. This practice in Byzantium was copied through most of Europe, the Middle East, and Northern Africa and was a continuation of roman coinage system with various changes.

Is there any Solo play rules?

We will be including optional Solo Play rules which use all the same mechanics as the regular rules with pre-determined setups if / when the player attacks player factions.

BackerKit is a service that crowdfunded project creators use to keep track of hundreds to tens of thousands of backers—from shipping details, pledge levels, preferences and quantities, whether they have paid or had their card declined, special notes, and everything in between!

The BackerKit software and support team is independent from the campaign’s project team—BackerKit does not handle the actual reward shipping. For more information about the preparation or delivery status of your rewards, please check the project's updates page.

How does BackerKit work?

After the campaign ends, the project creator will send you an email with a unique link to your survey. You can check out a walkthrough of the process here.

I never received my invitation. How do I complete the survey?

The most common reasons for not receiving a survey email is that you may be checking an email inbox different from the email address you used to sign up with Kickstarter, Indiegogo or Tilt Pro account, or it may be caught in your spam filter.

Confirm that the email address you are searching matches the email address tied to your Kickstarter, Indiegogo, or Tilt Pro account. If that doesn’t work, then try checking your spam, junk or promotions folders. You can also search for "backerkit” in your inbox.

To resend the survey to yourself, visit the project page and input the email address associated with your Kickstarter, Indiegogo or Tilt Pro account.

How do I update my shipping address?

When will my order be shipped, charged or locked?

That is handled directly by the project creator. BackerKit functions independently of the project itself, so we do not have control of their physical shipping timeline. If you want to check on the project’s status, we recommend reading over the project's updates page.

I completed the survey, but haven't received my rewards yet. When will they arrive?

As BackerKit does not actually handle any rewards or shipping, the best way to stay updated on the shipping timeline would be to check out the project's updates page.

You may not have an account. You can create an account by clicking the account confirmation link in any survey you have. You can also get started with signing up for a BackerKit account here.

If you have created an account and have gone through the previous steps, but are still having trouble, please reach out to us via the contact form. Let us know any important details (browser type, mobile device or computer, OS, etc).

Do I need a BackerKit account to fill out/receive my survey?

You may or may not have an account set up, but you can access the Account Request Confirmation from the bottom of the confirmation page of any of your surveys.

How do I update my email address in my backer account?

Contact BackerKit support by signing in to your BackerKit account, and then clicking on “Need Help?” in the top right side of the page! We will ask you to verify that you are the account holder; and to provide the new email address to which you would like to update your account. You can verify by your ownership of your backer account by either of the following methods:

* Sending us a screenshot of your original pledge that shows your backer number on Kickstarter (or Indiegogo, etc).

While signed in to your BackerKit account, click on “Need Help?” on the top right side of the page.

BackerKit is a service that crowdfunded project creators use to keep track of hundreds to tens of thousands of backers—from shipping details, pledge levels, preferences and quantities, whether they have paid or had their card declined, special notes, and everything in between!

The BackerKit software and support team is independent from the campaign’s project team-BackerKit does not handle the actual reward shipping. For more information about the preparation or delivery status of your rewards, please check the project's updates page.

A backer account helps backers (like you!) to keep their surveys organized. Oftentimes, people who support projects that use crowdfunding support multiple projects across crowdfunding platforms. Any project that uses BackerKit will appear in your BackerKit account, and will allow you to help keep track of updates such as address, items, timelines, support, etc.